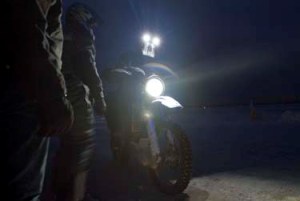 Ice Holes pick up 3rd place in the quintessential endurance race on ice.

The Numb Bum 24 is the worldâ€™s only twenty-four hour motorcycle endurance race on ice. Held in Sandy Beach, Alberta, February 18-19 2006. The event is put on by the Pembina Dirt Riders Association and sanctioned by the Canadian Motosport Racing Club.

I knew it was serious when they showed up on time, that would be 5:00 a.m. on Thursday morning, to pick me up and start on the fifteen-hour drive to Edmonton, Alberta. We met up with the rest of the team, sixteen riders in all, in Bellingham Washington, for breakfast and some last minute planning, before crossing the border into Canada. This would be the 6th trip to this event for the Ice Holes, and I guess crossing the border in the past has not always gone smoothly. It did seem an odd convoy, in this era of terror, hauling fuel drums and propane canisters across an international border. There was a palpable amount of stress relieved, having made it into Canada without incident. A collective sigh of relief was heaved, and our trip began.

Less than twelve hours after arriving in Canada, we were on the ice setting up our home for the race. In a matter of minutes I was back in the SUV, heat blasting, while the Ice Holes set up camp. Did I mention that it was â€“19 degrees Fahrenheit? Professionals, these Ice Holes, real pros. They couldnâ€™t wait to get on the bikes, like savages they raged through the pits on screaming machines with sharks teeth for tires, spitting out snow and ice in huge plumes. If Iâ€™ve ever seen a buzz saw with a human rider, these things were it. Oh, just your basic dirt bike, equipped with high-powered lights and row after row of bolts screwed into the tires for traction. And a crazed lunatic on the seat! These things looked like something your shop teacher warned you not to build. All we needed now were some fireworks and some guns.

As I stood and watched all this madness, a plow drove up and the driver jumped out. "Hey, howâ€™s it going eh?" "Good" I said. "You guys back for more, eh?" Apparently the Ice Holes are becoming known at this event. "If you guys have strippers in your pit again, I want to know". Strippers in the pits? I must have looked confused. "Yeah, I live right over there, eh, the house with the green roof on it. Come and get me eh, I donâ€™t want to miss it this year." I assured him that I would let him know if there were any more strippers in the pits. This race was starting to sound like fun but I couldnâ€™t help but notice that I was standing on a frozen lake in sub zero temperatures. "This ice racing thing," I said "donâ€™t you think itâ€™s a bit crazy?" He just looked at me with a wry little smile, eyes twinkling "yeah, but itâ€™s good fun though, eh?" he winked, got back in his plow, and drove off. Holy crap, what have I gotten myself into?

Saturday morning, 10:00 a.m., we arrive at the track. Most are still in the fog of the previous nightâ€™s outing, what with peeler bars and foreign beers to consume. Absinth anyone? Not sure when the riders meeting was but I think some of our riders made it. Anyway, the bikes were ready, and you can be damn sure the riders were too! Red Bull and coffee fueled, the Ice Holes came to race, and at 12:00 Noon, they and the rest of the forty-one-team field were off. It had to be one of the strangest starts I have ever seen. A Le Mans style, three wave start, with the official starter on hockey skates! Geared up riders looked like space men, running, or more like skidding towards their machines, where waiting team members helped them aboard, got them appropriately hooked up, and watched as the field screamed toward turn one, ice flying.

The next twenty-four hours consisted of, approximately, one-hour shifts for each rider, followed by three hours off. There was an unofficial team captain keeping track of who was on what bike and when they were due back to the pit. The riders, who were not on the bikes, did whatever they needed to do to combat the cold and the boredom of not riding. There were copious amounts of local magazines, collected at gas stations along the way, for perusing. There were various beverages for fighting off the cold and stimulating the mind. And of course there were places one could find to bury a head and sleep, or pass out, as the case may be. The pit/shelter is not the quietest place, with the constant jet engine like roar of the propane heater and racing machines whizzing by outside. But sleep is a must in a twenty-four hour race, and after several sessions in the saddle, a rider finds sleep wherever he can.

Rider changeover can be a little hectic, depending on what needs to be done to the bike. The team captain knows approximately when the bike will be in, and lets the rider on deck know when to be ready. The change over is quick. The bike pulls up outside the tent and the team springs into action. Several members rush out of the tent and there is a flurry of activity around the motorcycle. Gas is poured in, a rider is removed, another installed, oil checked, lights plugged in, messages passed, tires, chains, and anything else that needs attention gets it. The bike is restarted and it, and the "fresh" rider, head back out onto the ice. The returning rider enters the pit/shelter, gets out of his gear, hangs it in the drying area, puts on dry clothes and otherwise settles into his off time.

Through out the day, into the night and onto the next day, bikes come and go in the pits. I would say it became almost routine, but there is nothing routine about racing motorcycles at 3:00 a.m. on a frozen lake! The team lost their first bike just two hours into the race. The second bike was lost just about one hour from the finish. Two bikes completed the twenty-four hour event, but not without some major help from the crew. At 12:30am the KTM arrived in the pit in the back of a truck. It had broken a rear sprocket and hurled the chain through the case. On the way it also took out the clutch slave. The guys managed to patch the hole in the case with some Yamabond and some tire plugs, donated by another team, replaced the rear wheel and sprocket, and sent the bike back out. Miraculously, the KTM finished the race, running for almost eleven hours with tire plugs holding in the oil.

For their effort, The Ice Holes captured a third place trophy in the over class (over 400cc) and also nabbed the prestigious "Innovator" award for their handy repair work on the KTM. With no injuries to report, and two out of four bikes finishing the event, the 2006 numb bum 24 went pretty well for the Seattle based team. Last I heard, they were all safe inside the US border, no doubt plotting their return to the great white north.

Todd Kalamar is an independent writer and racer living in the Northwest.