What began as a one day poker run in 2006 has blossomed into a full fledged five day dual sport tour held somewhere in the Northwest each year. This year we toured west to east across Washington State and explored some of the lesser ridden roads. 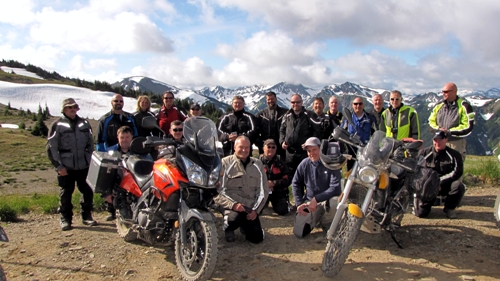 Day1 AM: Riders at the base of Observation Point.

On Monday morning, August 15th, 20 riders departed Hurricane Ridge in Olympic National Park and headed out to Obstruction Point for the first of two scheduled group photos. Dual sports of all brands were on hand including BMW, Suzuki, Kawasaki and a few vintage Hondas thrown in for good measure. The majority of the group was made up of Washington State riders, but a few travelled in from Oregon and Canada to be on hand. Many were previous Sasquatch riders from years past, while others were first timers in search of the elusive fuzzy beast. 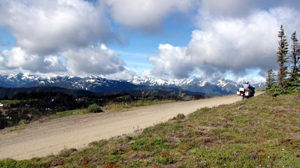 The road out to Obstruction Point was in pristine shape, having just opened 10 days earlier. Although the forecast had called for rain, the weather was cooperating with only a few clouds moving along the tips of the Olympic Range.  The rest of the week offered nothing but sunny skies and daytime temps in the 70's and 80's.

Day 1 AM: Bruce McCallum heads north on Obstruction Point Road
in search of a fuzzy beast.

Following the group shot we moved west and then south down the Olympic Range using a number of Forest Service roads that ran between Sequim and Hoodsport, our final destination for the day. Along the way we encountered satellite blackouts on the GPS units, as well as a few misplaced waypoints. The riders quickly recovered using common sense and learned GPS skills to find their way along the route. Most took lunch at Loggers Landing or The Timber House in Quilcene.

In the afternoon, the overlook along FS 2510 provided a stunning view across the Hood Canal to the Cascades range, our destination for Tuesday. At days end campers headed to Potlach State Park and the motel dwellers settled into an evening of cool temps along the Hood Canal. 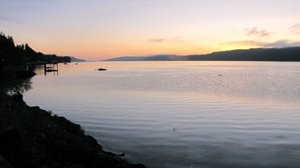 Tuesday morning riders geared up and headed out along a series of paved and gravel roads that moved them south to the Capitol Forest. From there they used the C Line and A line roads to proceed through the forest and then south toward Centralia. From there they headed east to Morton along the Centralia-Alpha Rd and then north up to Elbe. Lunch was taken at various places along the way.

Day 2 AM: Hood Canal at sunrise

At Elbe the riders went east, some stopping to enjoy the Klienart Metal Sculptures along SR 706. Then they horsed their bikes up to Tow Head Gap and continued eastward for explosive, stunning views of Mt. Rainier. The group gathered at Cruisers Pizza in Packwood for stories and lies which were shared by the pint and the pitcher.

Day 2 PM: Tod Coxen works his way around one of the most picturesque dual sport corners in the world just outside Packwood. 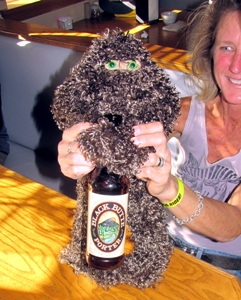 Wednesday began with several delays along highway 12 as WSDOT worked to shore up a rock wall and chip seal three sections of road. With each stop, helmets came off and bench racing ensued until the flagger gave the five minute warning to gear back up. Eventually the group eluded the final road work area by taking a scenic detour along Tieton Rd around Rimrock Lake. Then it was north up over Bethel Ridge and a series of back roads along the Naches River, through Cowiche and into Yakima. We were halfway through our journey

Day 2 PM: Debby Harvey sees to it that Sasquatch rehydrates at days end.

The afternoon began with a series of lefts and rights through the Moxee Valley, then a push to the Hanford Reach via SR 24. Following this pavement slingshot into the eastern region of Washington State, the group worked their bikes up above the Columbia River along the Waluke Slope for a 360 degree view that included Wanapum Dam to the North and the entire Hanford Reach to the south. 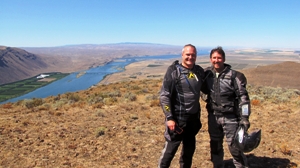 The final blast of the day came by way of a sweet ride down the unpaved Lower Crab Creek Rd through the Columbia National Wildlife Refuge. Picture taking below the Smyrna Bench will make for some nice souvenirs later. Campers headed to Potholes and others found rooms for the night in Othello. A party of 8, including the campers, put on a steak feed at Potholes State Park.

Thursday began with the entire entourage moving west across the Frenchman Hills along a series of paved and gravel agricultural arterials. Then it was north toward Quincy where another GPS glitch was encountered and solved before riders headed through the Lynch Coulee. The push north continued along the Rock Island Grade and across the top of the coulee over Badger Mountain to Waterville. The ladies at the Coyote Pass Cafe fixed many of the riders up with some healthy yet tasty lunch items.

Day 3 PM: Alan Ayers rides below the geologic beauty, the Smyrna bench, aboard his
Suzuki V-Strom side car rig.

In the afternoon some riders took up the challenge to ride across Sprauer Rd which was under construction. The ladies at Coyote had warned them to be careful along the rocks, which only made their dual sport glands salivate more. The road crew was taken off guard but in the end everyone made it across and had a good time.

Northward we continued into the Haystack Rocks across the beautiful Waterville Plateau to Brewster. The silt along Dyer Hill was nominal and most just breezed through it.

At Brewster riders left the desert and headed back into the forest for an afternoon trek to Winthrop. Along the way we encountered a large heard of black angus cows spread out along the entire stretch of South Summit Rd as we made our way to Loup Loup Pass. Along Beaver Creek, west over Lester Road and north up Bear Creek, the group travelled into Winthrop for a fun evening of stories and lies at the Duck Brand Inn.

Friday morning spelled the last day of the tour. All good things must come to an end, but not without a bang. Our batch of riders took off for the highest place you can ride a motorcycle in Washington State - Slate Peak. The weather was once again in our favor and the views across the peaks and into the valleys were nothing short of fantastic. The group photo was taken with 17 of the original 20 riders who started the tour. Hearty souls continued past the gate, taking the half mile walk up to the 7488' summit where an old fire lookout is perched.

Day 5 AM: Paul Bullard works his way to the top of Slate Peak. 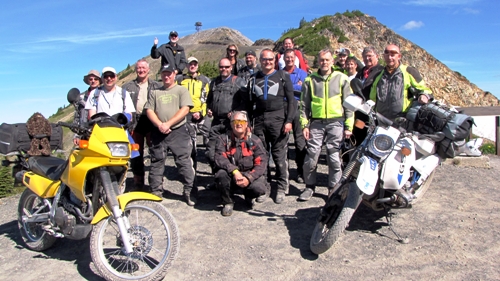 Day 5 AM: The final group shot at the base of Slate Peak. Donn Harvey notes the retired fire overlook in the rear.

The tour ended with lunch and festivities at the Mazama Store. Various prizes were made available by Advanstar Motorcycle Shows, Ride West BMW and Sound RIDER!

Missed the tour, but you'd still like to ride the route. Get a copy of the tour book and GPS files by clicking here.