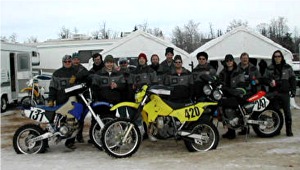 OH THE NORTH COUNTREE is a hard countree
That mothers a bloody brood;
And its icy arms hold hidden charms
For the greedy, the sinful and lewd.
And strong men rust, from the gold and the lust
That sears the Northland soul,
But the wickedest born, from the Pole to the Horn,
Are the Ice-Holes of Sandy Beach Shoal.

In early November a group of veteran ice racers, The Ice-Holes, and a horde of eager hangers-on, gathered to plan for the next 24 hour ice race, the Numb Bum. The task at hand was not a simple one. Get 15 to 20 motorcycle racers organized, take their money, prep three bikes, travel to the middle of Canada, and unleash good old fashioned American ice racing know how on the maple leafers. Lengthy and numerous organizational meetings were held that mostly involved beer and boasting. Of prime concern was where we could beg for money. Seattle Cycle Center and Motorcycle Works of Renton could be counted on for cheap parts and endless hours of donated labor, mounting the razor sharp studded tires. The Washington Motorcycle Road Racing Association coughed up a healthy check. We need to get some refrigerating coils put under Pacific Raceway so we can have winter races. Videos of questionable quality and taste were pawned off on hapless souls. Finally, in the depth of Canada, our fearless leader, Tyler Sandell, hit up the hotel. "Well, I guess I could give you a couple free rooms," said the manager. Amazing! " St. Albert Inn proudly announces support for the American ice racing team, The Ice-Holes, for 2002!" I couldn't believe it, when I ask for sponsorship, I get retail + 10%.

Our first roadblock hit in January. Due to global warming, El Nino, and maybe the wrath of God, the ice had failed to form properly and the race was cancelled. The insurance company required 22 inches of ice before the snow plow could go out. The lake had 10 inches. The Ice-Holes held a meeting that mostly involved beer and boasting, but no one knew how to change the weather.

A few weeks later came a reprieve. The gung-ho Canadian racers, unimpressed with the organizer's reliance on insurance, decided a signed waiver would be enough - they have socialized medicine after all. A short cold snap brought the ice up to 20 inches, and we were ready to go.

As the group neared departure day, the number of serious racers dwindled to 11, with two non-racing helpers. Preparations became frantic as tires were mounted, spares were compiled, while electrical systems were brought up to snuff to deal with the powered lights, grips, visors and vests. Then, on departure day - catastrophe! One of the many vans exploded and died. Oaths were uttered and deals were made. Finally, the four racers headed off for Canada in a borrowed crew cab pickup.

The course shown is from a smaller lake where a six hour race was run one week prior to the Numb Bum. The track for the 24 hour was similar, but much longer.

We arrived on Friday morning to set up camp and hope for some limited practice time. Luckily, the track was completed early and everyone had several laps on several different motorcycles. The track, an intestinal path carved through the snow of frozen Sandy Lake, was 16 kilometers long. The corners were about the same as last year. It was mostly second and third gear rhythm sections with the occasional "hockey-stop" hairpin and top gear straight. New this year was the "Death Spiral," a big, high-speed left hand corner that winds in, tightening like a clock spring. In the center is a pair of tight hairpins and then a big unwinding right hand turn leading onto a flat out straight. With various nicknames of the Snail, Parabolica, or Devil's Yin-Yang, it was a welcome milestone in the long lap.

As the sun started to set we put up the tents, rolled out the shag carpet, and headed to the hotel or motor home for beer, boasting, and bed.

Adversity has the effect of eliciting talents, which in
prosperous circumstances would have lain dormant.
-Horace

I was given the slight honor of starting the race, a running Le Mans style affair. After a dozen tests where the bike started crisply on the second kick, I was ready for the real thing. I sprinted across the ice, leapt on the seat and kicked desperately about 8 times. Finally it fired and I raced down the ice, one hand on the bars as the rear end squirmed on the up-shifts. My left hand held my goggles away from my face, hoping the fog would clear. Clear or not, I dropped the goggles onto my eyes and grab on. I don't like clutchless downshifts anyway, and at top speed, on ice, with one hand on the bars, I wasn't ready to experiment. The first lap was the toughest, but by number six a level of relaxation was attained, and then I'm ready for a swap.
Trouble developed within the first few rounds of rides. Two of our racers, encumbered by middle aged bodies, decided to drop out.

That left nine riders for 3 bikes. A wise man would see the futility, form a plan, and take action. "Ride with us," whispered teammates. "Park the bike," suggested Reason. "Consolidate resources," demanded Logic. But no one races because they're smart.

If you can force your heart and nerve and sinew
To serve your turn long after they are gone,
And so hold on when there is nothing in you
Except the Will which says to them: 'Hold on!'
Yours is the Earth and everything that's in it,
And - which is more - you'll be a Man, my son!

The "A" team, on a fast bike with four determined riders and running close to a podium position, was kept whole. The "B" team, reduced to three heads and running mid pack, had fair odds of finishing the race. The "C" team, Bill "Sparky" Sparks and myself, was doomed, a lost cause; hopeless. But there never was a hero that wasn't a fool first. On we went, session after session. Night fell, swiftly and completely, as it does in the north. On we went. The temperature dropped, so with each session came the angst of a teenage girl, "what should I wear?" On we went.
Nightfall splits the bikes into two categories. There are those who can see the corner, and those who can see a corner ahead too. We were well set up in this regard. Two giant rally lights pierced forward to show the frozen esses ahead.

We are not here to curse the darkness, but to light the candle that can guide us through the darkness.
-John F. Kennedy

A new experience this year were the water bogs. Cracks in the ice would let water surge through, forming a slush puddle and hiding ruts. Obviously, the advertised 20 inches of ice was not consistent across the whole lake. When a water field opened, the snow plows that constantly circle the track would home in and push the boundaries away from the crack. Rider changes brought short barks of information regarding the condition of the track.

Around midnight trouble struck the "B" team. Rob Fullwell came in on the back of the "A" bike. His machine stuck out on the track with a broken chain. Having three bikes running saved him the hour long wait for a snow plow to bring him in. With the delay to bring the bike in and a short delay to mount a new chain, only about four laps were lost, but the physical toll on Rob, who'd had to manhandle the big Suzuki, was showing.

Nothing in this world can take the place of persistence. Talent will not; nothing is more common than unsuccessful people with talent. Genius will not; unrewarded genius is almost a proverb. Education will not; the world is full of educated derelicts. Persistence and determination alone are omnipotent. The slogan 'press on' has solved and always will solve the problems of the (ice) race.
-Calvin Coolidge

I started to worry about Sparky. I only got to talk for a few seconds at a time. He seemed ready to go and was smiling, but he always smiled. You could chop the arms and legs off the man and throw him in a vat of rock salt. He'd look around, grin a big grin and say, "This is the fancy Mediterranean sea salt that replenishes vital trace minerals. We are GOL-DEN!"

All this time, the "A" team, riding a 400 Yamaha, are clicking off the fast laps. Always running in fourth and always within biting distance of a podium, they bang away relentlessly corner after corner, lap after lap.

Never let the front tire know what the rear tire is doing.

The toils were made easier by the care given in the pits. Ed, our ever-present chef doled out chowder, stew pancakes, eggs and hash. The Ice-Holes became the only team to gain weight over a 24 hour endurance event. Lee, our own inspector gadget, was always there with an answer to the question of, "Does anyone have aâ€¦?" He sat up all night logging lap times, documenting pit stops and raising the alarm if someone went past due. We don't like to leave teammates stranded on a frozen lake for too long, even if it is a balmy 20 farenheight.

At about 3:00 AM, as I sat in my leathers, sleeping next to a propane heater, I'm woken to a new task. Rob had just come in after only two laps and collapsed, unable to go on. The other riders on his team have enough time to shed riding gear between stints, and weren't suited up yet. I've been recruited to fill in for two laps. My mind screamed, "I'M ON THE TWO-MAN TEAM! YOU HELP ME!" My mouth mumbled, "ok." Teammates help each other. For two laps I concentrated on my riding and learning the new bike. I forgot that Rob's demise will bring new things to think about, and my mind was barely functioning.

I don't think anyone in my position would quit. It would be cowardice.
Mikhail Gorbachev

At about 4:00 AM, as I was waiting to spell Sparky, the conversation was held. There were 8 hours to go and the "B" team didn't think they could make it with two riders. I knew I had another session left in me, but I didn't know how many more than that, and I couldn't judge Sparky. To go down swinging is admirable. To let down your team for cheap chest thumping is selfish. When Sparky came in we had a quick discussion and accepted the inevitable. The Honda XR400 was rolled to the side and set on the kickstand. A perfectly good machine was left idle with no one to race it. Sparky and I formed the third and fourth legs of the Suzuki team.

Dawn broke as I'm riding. Seeing the light come up, knowing there were only six hours left, I felt a new surge of energy. The end was attainable. The ruts had grown through the night, but nothing unmanageable. When I crawled off the machine knowing there were three other riders to churn out laps, I sat in a chair, closed my eyes and no longer cared. Sweet peace.

Eventually, noon came. The final victims rolled in. In the final accounting our lead bike took fourth, not quite able to make the coveted boast, "I got wood!" The second bike, with an hour lost to the broken chain, was pushed down to 11th out of fourteen. Sparky wins the ironman award with 33 laps total. I am a close second at 31. All that was left was a well deserved slumber at the St. Albert Inn and then the long drive home, away from the icy tundra. SR!