Welcome to Indianapolis where itâ€™s â€˜Anytown USA.â€™ Well, almost. See in Indianapolis they have one thing that theyâ€™re known for, the Indianapolis 500 of course. Beyond that thereâ€™s little you can point to that makes this city standout. So the city embraced the convention industry and created a 600,000 square foot convention center.

A rare find, a CR929RR Hill Climber was on display at the show.

For the Powersports industry itâ€™s the one thing we can point to about the city that is synonymous to motorcycling. Each year in February the Powersports industry convenes for three days of non-stop conventioning. Itâ€™s a chance for dealers to see what the latest items are out there, whatâ€™s on the horizon, cut deals with their vendors and manufacturers; and in the evenings enjoy the festivities in the suites at the various local hotel rooms. 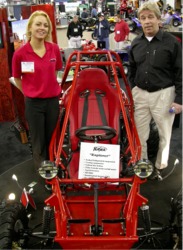 Most everyone who is anyone in the parts and accessories field has some floor space. Vanson Leathers, First Gear, Hondaline, Michelin, Yoshimura, Joe Rocket, and 794 other players are on hand to display their wares. Dealers will preview whatâ€™s there and ultimately decide what to put on their shelves at the store. And thatâ€™s all youâ€™ll ever see.

If you want to see what else is out there, go to your dealer and ask them if you can peruse the Tucker Rocky, White Brothers and Parts Unlimited catalogs. Wow, what an eye opener. All the toys that never make it to the shelf, but most dealers can order those items if youâ€™re interested.

Some of the innovations we saw this year include the following:

In addition to Touratech, Nikwax and Avon, there were also showings from other Washington State businesses including Gerbings Heated Clothing, EBC, Kasea, Classic Motorcycles, Titanium Springs, Love Leathers, and Bardahl.

The most evident market growth at the show was the number of companies who sell protective motorcycle clothing. Itâ€™s good to see this market growing as riders become more safety conscious. Perhaps weâ€™ll see less tennis shoes-and-shorts clad riders this summer, and things will be a little slower in the emergency rooms. "I was impressed with the new Field Sheer line and weâ€™ll be adding it at the store shortly" commented Renton Motorcycleâ€™s Junior Queen.

The biggest growth apparel item is the mesh jackets, pants and gloves products, known as "air" products for their ability to help keep a rider cooler in below 90 degree weather. "The new offerings from First Gear were impressive" commented Ride West BMWâ€™s Brendan Ferrer, "weâ€™re adding the mesh line this spring."

A few bike manufacturers were showing off some new models. It was my first glimpse at the Moto Guzzi Breva, an entry level 750 thatâ€™s priced at just $7,499. Aprilia was showing off the new Tuano sportbike and Ducati was showing the 1100ie, a slick little machine that marries together styling from the sportbike, sport touring, adventure, and super motard categories. In other words, the bike is in a league of its own.

Enough Already!!! There were hundreds of go-ped style scooter available for franchise, as well as Chinese Scooters and ATVâ€™s, many of which still need to comply with DOT standards (most are two stroke). And speaking of things that got a little annoying at the show, how about vendors who kept running out of business cards?

As for my travel experience (as if you really care), I had two pens explode into my hands at 30,000 feet and United Airlines seems to be making a habit out of providing passengers with broken headphones. I also became very aware of how much I like the moist air in the Northwest and how much my sinuses missed it for the six days I was gone.

Advanstar puts on the show, the same people who bring the International Motorcycle Show to the Northwest every year. They do a great job and so much so that they have maxed out the 600,000 square feet available in Indianapolis. The word is they will move the show to Chicago in 2005 where 2.2 million square feet await in the windy cityâ€™s convention center.